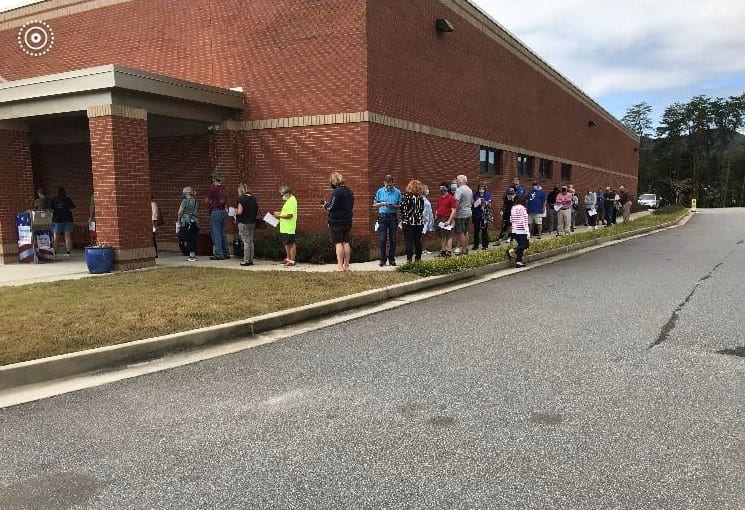 FORSYTH COUNTY, Ga. — Approximately 9,000 voters — some waiting as long as two hours to cast their ballot — flocked to Forsyth County’s seven voting locations on the first two days of advanced voting in the 2020 Presidential Election.

“We heard on the news that it was a record-breaking day for the state,” Director of Voter Registration and Elections Mandi Smith said. “I haven’t checked for us specifically, but I believe it was for us as well.”

5,320 votes were cast on the first day, compared to the 3,500 votes on the first day of advanced voting in the 2016 presidential election,” Smith added. By midday on Tuesday, more than 3,000 votes were added.
“Overall thing went really welll,” she said. “When you have that many people come through, there are going to be lines. But the lines moved well. I don’t think anyone had more than a two-hour wait and that was at the peak. Most waited 30-45 minutes. The longest wait was at Sharon Springs Park.”

Fetch Your News is a hyper local news outlet that covers Dawson, Lumpkin, White, Fannin, Gilmer, Pickens, Union, Towns and Murray counties as well as Cherokee County in N.C. FYN attracts 300,000+ page views per month, 3.5 million impressions per month and approximately 15,000 viewers per week on FYNTV.com and up to 60,000 Facebook page reach. If you would like to follow up-to-date local events in any of those counties, please visit us at FetchYourNews.com