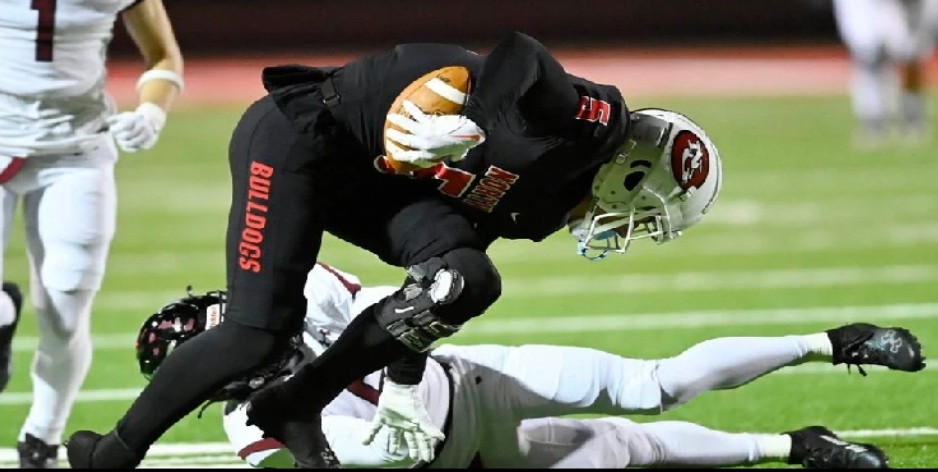 On a Frigid Friday Night, Lambert Gets Ran Out of the Playoffs By North Gwinnett

The Lambert Longhorns traveled across town to play the North Gwinnett Bulldogs. The stands were packed with winter coats, and hand warmers, but the field was filled with adrenaline and anticipation. Both teams came into the game with easy wins over first-round opponents. Ultimately North Gwinnett overpowered Lambert in a down-to-the-wire game, 38-35.

The Game started with a series of unfortunate events for the Longhorns. After a kick return to the 17-yard line, there were no yards going forward. After getting stopped on first and second down, QB James Tyre gets sacked at his own 12-yard line. On 4th and 15, the Longhorns tried to punt but got blocked and recovered by the punter who then got tackled in the end zone for a safety.

North Gwinnett received the ball and began marching down the field. Back-to-back 10-yard rushes set them up at their own 45 yd line. 1st down, North Gwinnett QB Ryan Hall fakes the handoff to the RB and takes off up the middle, and sprints in untouched for a 55 Yard TD run.

Lambert gets the ball back with a fair catch on the kick return. Opened their drive up with an incomplete pass. Then, a snap sails over Tyre’s head who recovers and is tackled at the 8-yard line. On 3rd down, James Tyre drops back to pass but a Bulldog DE comes off the edge and knocks the ball right out of his hand for a strip sack. The ball was recovered at the one-yard line by North Gwinnett. Ryan Hall then walks it in for the touchdown.

Lambert gets the ball back and looks to finally get things going. After picking up a first down, Tyre throws up a fade route to his WR on the outside who goes up and gets it to bring them to North Gwinnett 40. Which takes them to the end of the first quarter. Then, the mobile QB takes the snap and avoids two tackles and while finally being tripped up, falling sideways, throws sidearm to his RB who has blockers, and takes it to the crib for a Longhorn Touchdown.

The Bulldogs waste no time getting back to it. They start with a 40-yard pass to C.J. Hollinquest to take it to Lambert’s 35 Yard Line. Then an end around gets broken up for a loss, and a sack sets up a 3rd and 15. Ryan Hall drops back, maneuvers right, breaks off a tackle, and finds TE Will Collins for a first down and a little more. Lambert holds the Bulldogs to 4th down and 4, but a Longhorn defender jumps offside and gives them a fresh set of downs inside the goal line. They hold them to 3rd and Goal and don’t convert but a holding call on the longhorn DB gives them another first down. It only takes two tries for the monster FB/DE Kayden Mcdonald to punch it in the endzone. Mcdonald also picked up the two-point conversion.

Both teams stall out and a North Gwinnett punt leads to another spark for the Longhorns. They convert twice on third down and get to the 50-yard line. Then an electric play by Christian smith who takes a screen pass to the house for the score.

Lambert’s offense gets held and they punt late in the second quarter. The Bulldogs can’t get anything going and get sacked for a loss of 6. 4th and 16 at North Gwinnett’s own 32, they pull the unexpected. The bulldogs run a fake punt, the “punter” tries to throw to the gunner/wide receiver for a fade route which was overthrown. Lambert takes the ball in plus territory with time ticking down. First down, Lambert starts with trickery with a wide receiver flip pass which results in a pass interference on North Gwinnett. 1 min remaining, and the ball is on the Bulldog 14. An incompletion on the first down. On 2nd down and 10, Tyre tries to get away but is brought down in the backfield for the sack. 3rd and 15, Tyre fakes the handoff and rolls right, finding a wide-open WR Christian Smith for the touchdown.

North Gwinnett received the second-half kickoff but didn’t possess the ball for long. QB Ryan Hall throws a jump ball to his receiver on the outside but is deflected, and intercepted by the Longhorns, and returned to the Bulldogs 40 yard line. Lambert wasted no time with momentum already on their side, they picked up a first down right away. Then, James Tyre lights a match on a speed option, Tyre fakes the pitch to the running back and goes off to the races where no one will catch him for a 30-yard touchdown run.

The Bulldogs find a new style of offense. Coach Bill Stewart saw the monster 6’3, 305lb FB/DE and said give him the ball. North Gwinnett proceeds with a 8 minute 77 yard drive led by the big man Kayden Mcdonald. The Lambert D-line already being undersized did not help 17 carries on one drive by the FB. Who eventually did fall into the end zone to take the lead and end the 3rd quarter.

Lambert’s offense finally takes the field but is held and forced to punt right away. The bulldogs take over and if it’s not broke don’t fix it, they give the ball to Mcdonald 13 times in a row. Then finally gives him a break, then throwing him right back in there for 3 more carries until they go into play action. QB Ryan Hall fakes the handoff to the machine and fires a pass to a wide-open WR Harbin Timmey who walks it in and extends the lead for the Bulldogs.

Lambert gets an amazing return to the 50 then an unsportsmanlike conduct on the North Gwinnett sideline allows them to start at the Bulldog’s 35 yard line. They get stopped on 1st down, Tyre gets sacked on 2nd down, and an underthrown fade route gets swatted down on 3rd down. 4th and 18, Tyre drops back and splits the coverage to deliver a dime to a seaming Christian Smith for his 3rd TD of the game. An unbelievable performance by the sophomore receiver.

North Gwinnett went on a tear of perfect clock management. Using all 3 downs to move the chains and chewing clock all the way down until the game was over and not letting Lambert have a shot at all.

North Gwinnett’s Ohio State Commit DE/FB Kayden Mcdonald had a monster game not only on the offensive side, but making a huge impact on the defense. Christian Smith stepped up huge in the moment with 3 TDs and finding ways to keep the team alive. A bright future for the Sophomore. Lambert ends their season with only two losses to two very respected teams. North Gwinnett is looking to move past another round by looking to defeat an elite Colquitt County team.