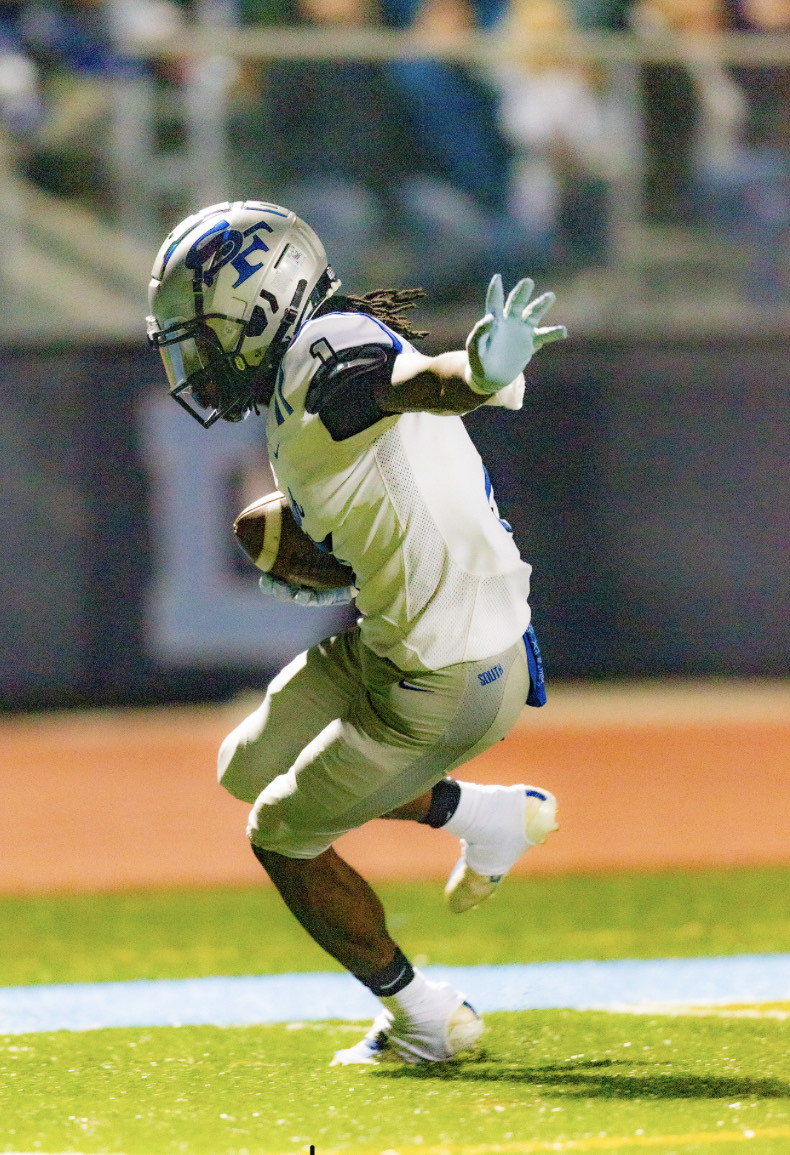 On a frigid Friday night, the South Forsyth War Eagles took a short bus ride to go and play the Denmark Danes, which was a grudge match that dates back from last year. Denmark walked into South Forsyth’s stadium and stole the region right from them in a grueling 17-14 loss. Coming into this game, nobody thought it was going to be a high-scoring affair, and it absolutely wasn’t. Both defenses played exceptional but the War Eagles came out on top in a 10-3 victory.

Denmark received the ball to start the game and got brought to a halt at their own 40. It didn’t take long for the War Eagle defense to make an impact play.  The Danes go to punt and super speedy SR WR/DB Chris Nelson comes flying off the edge and blocks it and South Forsyth recovers on the 32 yd line.

As soon as South got on offense Chris Nelson made another electric play.  Shotgun snap, SR QB Ty Watkins fakes the handoff and throws it to Nelson, who has one on one with a corner who gets cooked off the break. Watkins throws it up and Nelson comes back for it, and jumps over the defender to make the catch to walk into the endzone for the touchdown.

Denmark gets the ball and drives all the way down to the War Eagle 30.  On Fourth and Short, the Danes go for it and immediately regret it.  Danes try to throw but 4 Star DT Nathan Efobi cuts right through the line and chases down the QB for a huge 4th down stop.

South is held on Offense again and forced to punt.  But a shanked punt allows the Danes to get the ball back on the War Eagle 40 yd line.  The Danes’ bad beats on offense only continue as another turnover occurs.  Denmark runs the ball up the middle and as the RB tries to truck through the defense, the ball is popped out and is recovered by a diving War Eagle defender.

Even though Denmark hasn’t been making flashy plays on their defense, they’ve been doing their job as the War Eagle offense has done anything since the one play touchdown and are forced to punt again.

There wasn’t a scoring opportunity until right before halftime when South Forsyth had a field goal chance to extend it to a two possession game but unfortunately missed wide right.

South received the ball to start the second half and the Danes finally got a break. After driving all the way down to Denmark’s 30 yd line, the War Eagles make their first blunder. On a read option call, Watkins tries to take it himself and is stripped and hastily jumped on by Clemson commit LB Dee Crayton. Another big stop from the Denmark defense.

The Denmark offense looked like they were trying to give the ball away after driving with some nice passes to the War Eagle 5 yd line. First and Goal, the Denmark RB tries to hit the hole and immediately bounced back and the ball jumps loose. Neither team can scoop it up with at least 6 players touching it until a Dane gets on top of it at the 20 yd line. Second and Goal, Denmark drops back into a pass and the QB throws an ill-advised pass into three South Forsyth defenders and almost gets picked off. Third and Goal, Denmark tries to get tricky with it and it does not work. They pitch it to the right and now the RB tries to throw and none of the War Eagles are fooled as he throws a jump ball that is almost picked by DB Kai Fernandes. They settle for a field goal and drill it.

Later in the half, South gets the ball and keeps running the same offense which hasn’t been working.  Dane’s defenders have been getting to the QB Watkins very easily.  So to counter that they’ve been finding ways to get the ball out faster and faster with either quick screens on the outside or QB draws. QB Watkins used his legs a lot this game and tried his hardest to extend plays.  After driving all the way down to the Denmark 8 yd line, the War Eagles stood up after getting stuffed on two read options and Watkins being swung around on a play-action bootleg.  SR K Tyler Simpson drills the field goal and extends their lead.

Denmark receives the kick and their offense brings them down to the 48 yd line where they are stopped on three straight plays. On 4th and 2, they try a designed QB run to the left and he is met by a sea of War Eagle defenders for a huge stand. South Forsyth gets the ball but is held and has to punt again. Denmark on offense tries some trickery again this time with a double pass that is incomplete but a huge pass interference comes in handy and gets the Danes up to the War Eagle 24 yd line. After two straight penalties on the Danes, they are backed up to the 42 where they get stopped again on third down. On 4th and 31, the Danes lined up in field goal formation. South Forsyth has 5 people playing back and 6 rushing. So in one of the wildest calls I’ve ever seen, they try to run a fake field goal on a 60 yd field goal. The holder catches the snap and tries to run to the outside where he’s met by 7 Eagle War Defenders and has 0 blockers. He’s brought down and it’s South Forsyth football.

South gets the ball and chews the clock all the way down to less than a minute and Denmark has 0 timeouts before punting away and pinning them inside the 5 yd line. Denmark gets a series of underneath routes for first downs and continues to stop the clock. They finally get past the 50 yd line but with little time left and chuck up a Hail Mary that is swatted down by the War Eagles who come out victorious.

This was a huge emotional bounce-back win for South Forsyth after only losing to Milton by 7 and what happened last year. Now with this team finally becoming healthy and beating a big region opponent like Denmark, these are all great signs right now. The only problem is that the offense has progressively gotten less efficient as the season goes on and has not been able to go deep into the playbook. If they can change that around, they’ll become a powerhouse in no time. Denmark looks to bounce back facing an explosive, well-coached Lambert team who’s still undefeated. South looks to start a winning streak by facing a very inferior Forsyth Central team for homecoming night.