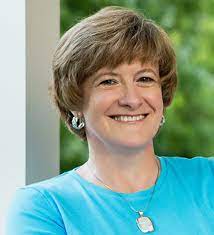 The new voting law signed by Gov. Brian Kemp last week has prompted cries of “voter suppression” among Democrats. But Gilligan said the bill actually expands voting opportunities by increasing the number of early voting days to as many as four. Now, voters can cast their ballot on either of two early voting Saturdays or at least one Sunday. Some counties may opt to add a second Sunday.

The portion of the 98-page law that has drawn the most criticism from Democrats is the requirement that a photo ID accompany each request for an absentee ballot by mail. “Some of the criticism you just have to say is not valid,” Gilligan said.

“It’s a large bill and I have read every word,”she said. “I don’t agree with every word of this bill but it’s a good bill.”

Voter drop boxes that appeared in some Georgia counties for the first time in 2020 were optional, Gilligan noted. Under the new law they are required in every county but must be inside and secure 24/7. Those ballots must be collected and counted daily.

If the Senate passes a version of the bill that is different to the House bill, a conference committee will be appointed. Three senators and three representatives will negotiate the final product.

Fetch Your News is a hyper local news outlet that covers Dawson, Lumpkin, White, Fannin, Gilmer, Pickens, Union, Towns and Murray counties as well as Cherokee County in N.C. FYN attracts 300,000+ page views per month, 3.5 million impressions per month and approximately 15,000 viewers per week on FYNTV.com and up to 60,000 Facebook page reach. If you would like to follow up-to-date local events in any of those counties, please visit us at FetchYourNews.com